Hey! Next update unfortunately won't be a focus on added story content but rather... 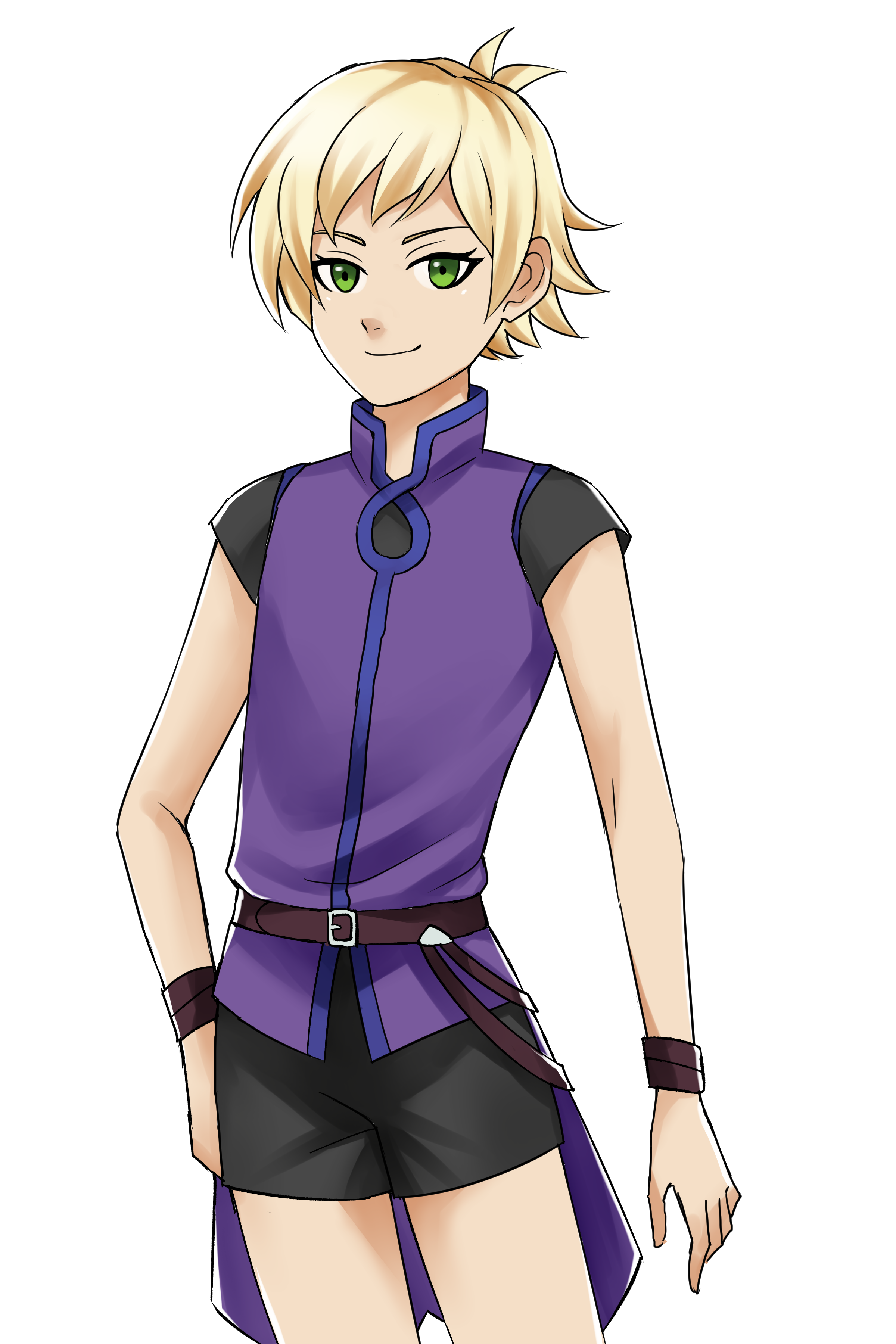 I am implementing a 3rd option to play the game as a non-binary protagonist.

There's a tooon of work behind this cause I had to go all the way back and add their dialogue in as well as making some decisions about what kind of design they will have.

Anyway, for now, enjoy some of the beautiful CG's our wonderful artist BlackRoseMii has drawn for them. (She's also the voice actor for this protagonist so doubly aaaaaweeeesoooome!) 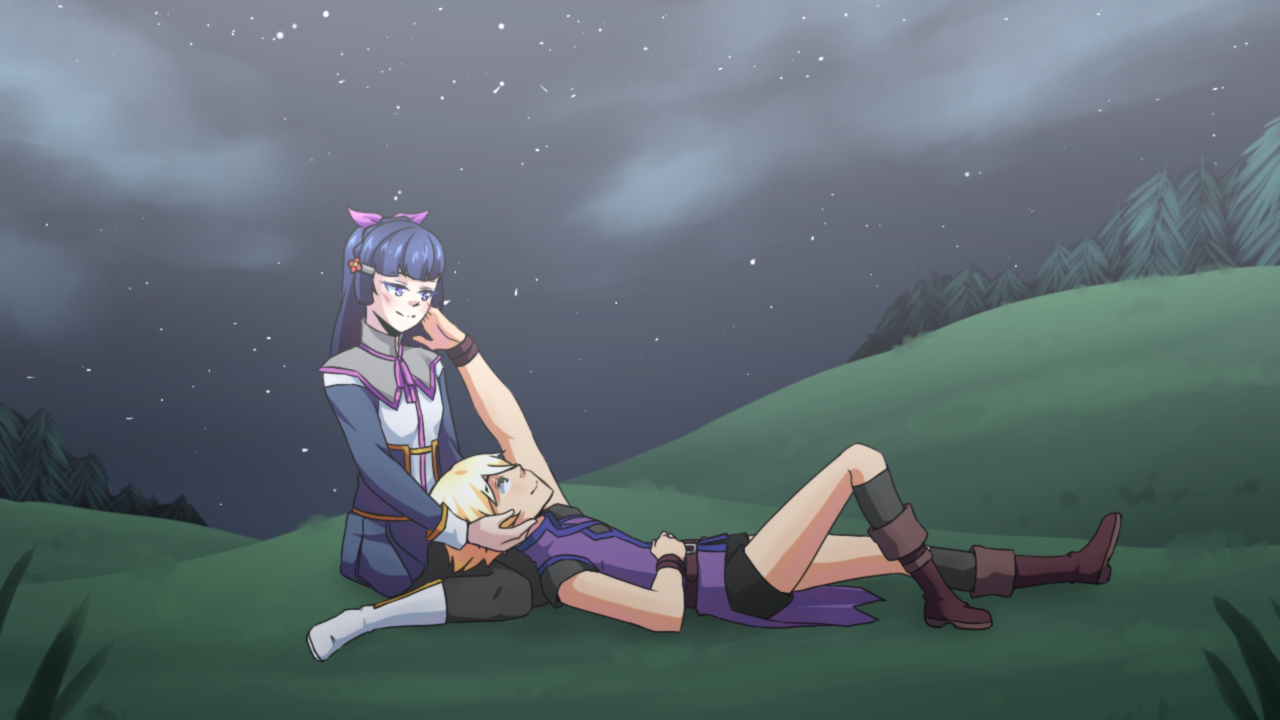 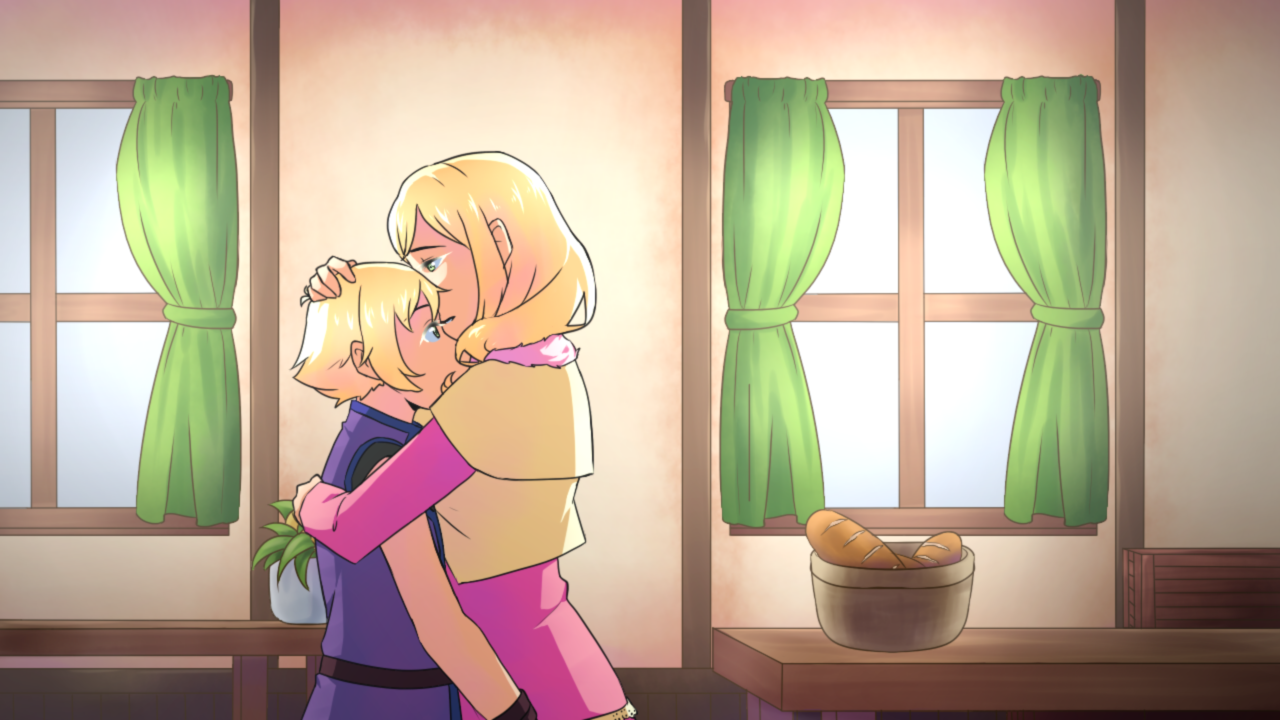 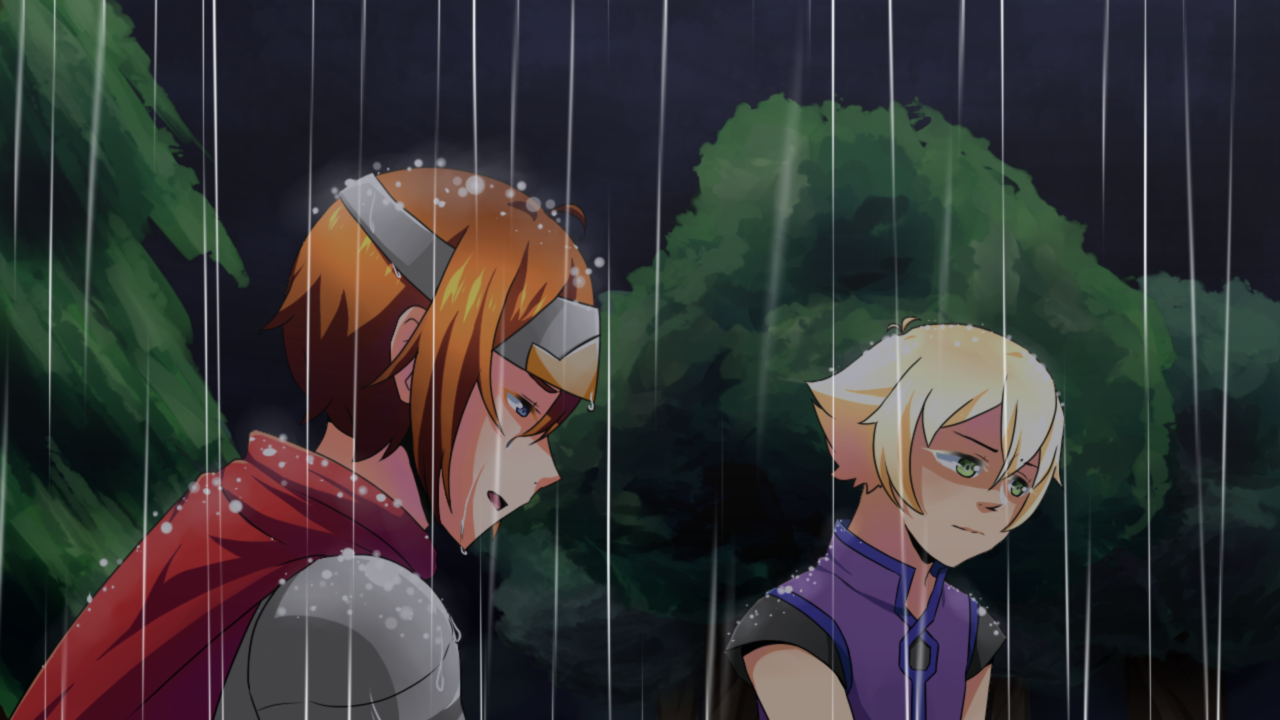 (Sorry for long comment, you don't need to read it if you don't want to, it's fine)

So yeah, hehe. I have to do it.  Jokes aside, I knew that this may happen actually. Considering that Sam is name that can be used for man and woman(Even though "Sam" is short version of "Samuel" a.k.a "name of God" or "God has heard" which is a male name).

Anyway, personally I support this decision to add a third optinal protagonist for non-binary people. You should be careful though, while I'm sure you guys have only good intentions, there is always going to be people who will not like it.(For any reason, even if there is none)

For example. Recently, there has been a controversy around "Trap" and "Transgender" characters in Anime community. It's a mess, but stay strong okay?

Now since I played the game 3 time in a row, still unable to remember everyone's names(I'm that bad), romance all female available characters, and prevent certain massacre from happening. I have to say if the quality of this project will remain as it is now(For unknown how many hours this game will be, 5/10 hours maybe?). You should seriously consider about putting this game on Steam and give it a price(I feel bad for not supporting this game). And I'm sure this game will receive a lot of positive reviews when it will be finished.

Another thing, is that on my 3 run of the game I found some small things like missed dialogues that, while is a minor details and is not important, and can be easily missed. Still can be added to make nitpicking players like a little bit happy.

For example: Before the final fight with Mad Queen, King Rialto, Sir Garth, Queen Robyne all deliver their final badass lines before the final showdown with Mad Queen. Everyone... exceptPrince Yorick which is weird considering it was his mother before, but no he was just standing there ready to shoot with his crossbow and not saying anything. I think if you add for him something like: "Mother... I swear on Hawk name that I will return you(her body) home!" It would feel muc better.

Another example: There was that one time when Sam's sister "Serrani" mentions that Sam as child was attacked by a group of goblins in the forest during the night time, and if she was 1 second late Sam would be dead. Sounds like a traumatic experience for a child to me. And during Tyran and Male!Sam(Male for me first mission together, was with goblins.

So with that in mind, maybe before Tyran and Sam will enter the cave with goblins there is going to be this: "G-Goblins?!" "Yeah... So what? Are you afraid of little shrimps?" "Emmm... Maybe a little bit, yes?" "Thc! Guess I have no choice, lead the way loser, when little shits start to coming out their holes, I will slice them in half!" "...Alright."

And after the first fight with any goblin enemy there will be Tyran's dialogue in the corner and another dialogue between Tyran and Sam like: "Heh, see? There is nothing to be afraid from those little brats." "I... Guess you right." Giving our duo a little bit of character development.

Again maybe not important but I was feeling like I have to point that out.

Alright, I already wrote too much. I feel like I forgot something to say, but I guess for now it enough.

That's aboit it! Good luck JaBud Games and have a good day! Even though you put Maryana in most of your icons(which makes her pretty important),  I will still support Lily x Male!Sam. Though I feel like you gonna put a "brother and sister" or "twins" plot twist between them at some point and crush my dreams for their romance... ;(

Oh boy those are some really good ideas for the lines! I’d definitely implement them :D that goblin idea is actually really good tbh. Thank you soooo much!

and the game is on steam but I’m shooting to upload it there as soon as I finish Act 4 :) the game can probably end around there tbh. Thank you sooo much for playing!

(Heh,thank you for patient! I know how annoying I can be with those long comments. But it just shows that I'm passion about you game! Please bear with me.)

I was having a lot of similar ideas like those lines when I was writing my comment above. But as I said early I have bad memories and on the next day I forgot what I was wanting to say. Plus, this comment was already long enough.

But now, I remembered a couple of those ideas. First: would be to give our MC - Sam(Any gender) a fear of monster, due to actions of the said goblin in Sam's past, they were left traumatize in fear of any monster will do the same of worst thing to them. But they didn't want to admit it or show due to their pride to bee sean as weak, which means that the real reason why they went to South Academy is not to only make his family proud but also to show his worth as person. In oreder to it though they trained with their class Warrior/Rogue/Mage using Sword/Bow/Tome to get better.

Maybe when Sam and Kuro will leave the Strawberry Village for the first time and on their first enemy encounter there will be this dialogue: Sam: "(This is it!... This is the moment I was practising all my life!.... I... I can do this!)" Kuro: "Sam... Don't worry, we will get through this together!" or something like that.

And through their journey, Sam and his friend will face more dangerous monsters/enemies *cough*Princess Lily, cause she has a demonic aura around her, and kind of creepy child*cough* Sam will learn to accept being weak and afraid of monster, but he will not let them doing horrible things because of it(if his karma is "very good"), or they will laugh mad because now that they got stronger, they realize how pathetic he was too thing that the monsters were any danger for them(if his karma is "very evil").

And maybe Sam will either "help"(very good) or "corrupt"/"kill"(very bad) Princess Lily depending on your choices through the first 2/3 acts(Help her you idiot! Don't do the bad one!). You can call it "Sam's positive/negative character arc" depengind on the players choices.

Secong: The name of the game. I always felt that "Rising Saga: Origins" is missing something, to fully show the theme of the game without playing the game. So I suggest add just one word "Rising Saga: Vanguard Origins". So here the things: The "Rising Saga" part of the title is referring to our MC - Sam as the game is his "saga of rising"(for the good or for the bad) and change the world by their choices as their journey continues and they are rising in all means of the word.

Next part "Vanguard Origins" is referring to our class and companions at South Academy. Sincce Vanguard is special class that stands out of usual Adventurer's system, and the one that we taught by elite for the first 2 acts and will probably play a role in the future acts. While Sam is also the part of the Vanguard project, this part of the title is mostly about other members of Vanguard class as our friend will be become major parts of the worlds future(Again for the good or for the bad).

And that's about it as far as what I was wanting to say. God anothing long comment sorry...

P.S - I see you didn't answer on my question about a chance of Sam and Lily being sibling of King Rialto(Lily' dad), Sir Garth(Sam's dad), and Queen Robyne(Lily's, and Sam's mother). I figured it out by Queen Robyne lines before the battle with Mad Queen when Sir Garth was about to buy some times for the rest of his friends. Queen Robyne: "Garth I... We can't afford to lose you!" Gears start to working in my head that Garth may be Robyne secret/ex lover, while Rialto is her current love/husband.

I understand that I may be totally wrong on this one, and I hope I am. Since you know... Lily and Male!Sam is my new pairing, and incest is not my king of interest. But then again this game is a medieval fantasy and incest was a thing back them... I understand that since you guys want to avoid a major plot spoiler under your game's comments... But still... I'm crying... T_T

P.S.S- I forgot to say about Non-binary Sam scenes like waking up on morning, and bath scenes will have to be changed for obvious reasons. But I'm sure you already knew that, I just felt like to write it.